The Value and Art of the Vintage Fairground Collection

You are here:
Collections 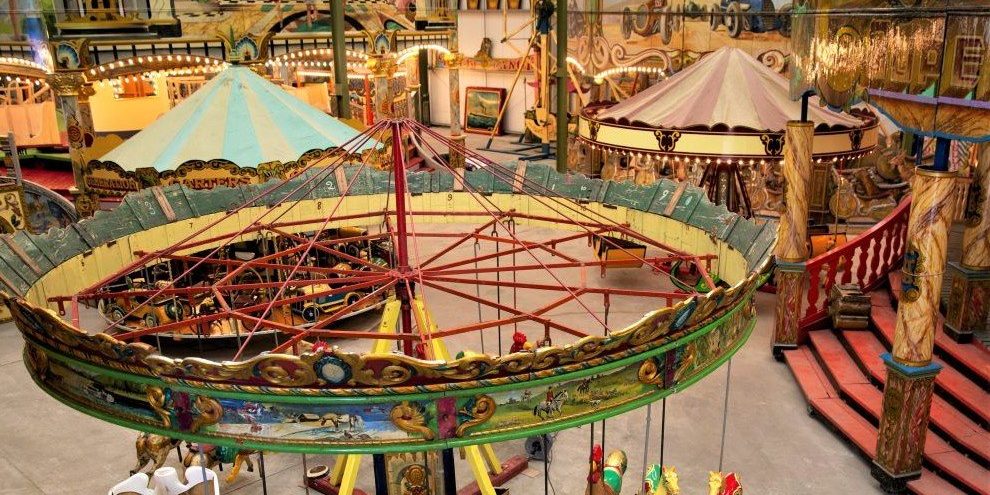 “Since the 19th century, the funfair has been one of the staple events of the typical British childhood and the arrival of horse-drawn carts, steam engines, wagons and rides marked the beginning of the spring months.

Collectors enjoy these items which are packed with nostalgia and are becoming increasingly difficult to source via auction houses or antiques shops”.

To buy, or to collect?

Art collecting has a long history, and most of the world’s art museums grew out of great private collections formed by royalty, the aristocracy, or the wealthy. 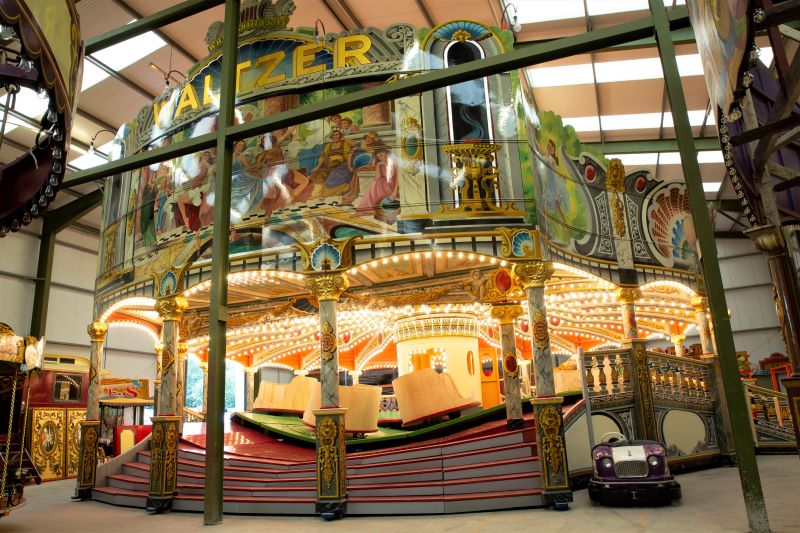 There is great value in building a collection

Collections come rich with stories, and the fairground ‘showland’ world sure has plenty of them! Show rides, and show families have created marvellous entertainment for generations across the country and the world.

Some fairground enthusiasts are bitten by the bug of assembling all sorts of collectibles. From complete operational rides and stalls, or specialising in carousel galloper horses, pieces of fairground artwork to organs and living wagons, and everything ‘fairground’ in between.

At Littleboy’s you’ll find artefacts as small as shooting range targets of a hen, to the majestic and iconic British fairground attraction, the Waltzer. In the Littleboy’s vintage fairground showroom is this collector’s masterpiece, the W.H. Marshall’s 1938 Lakin “Masterpiece Waltzer”. It irresistibly takes you back to the glory days of a bygone era, especially when the lights come on! 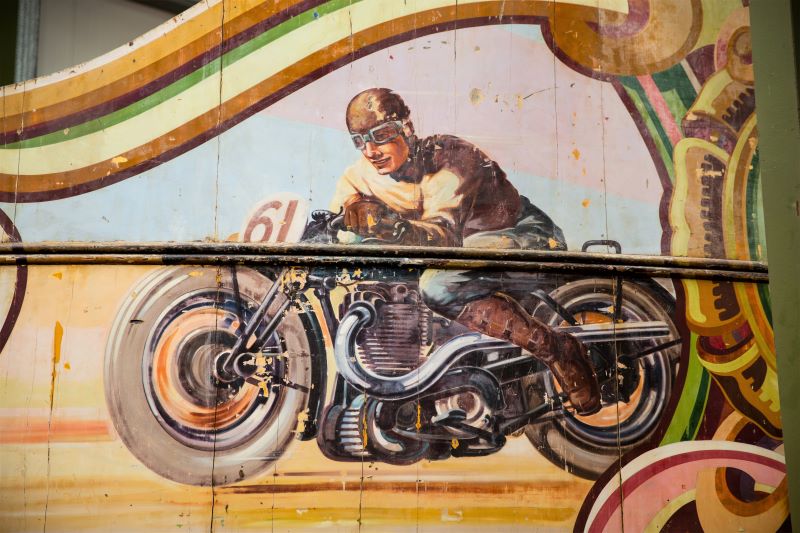 All the fun of the fairground as a marker of time

Vintage fairground rides and items are like a time capsule – with the artwork on rides and shows mirroring the social changes that took place in the world around them. References to popular culture, fashions, and trends of the time were customary. They evolved with the march of time and new trends replaced by the next. This is also part of the magic that makes them highly collectible.

What often starts as a casual love for the heyday of the past can quickly become a passion that completely takes over a collector’s life. In the case of Littleboy’s, the collection grew to a size where it became necessary to house it all in a vast showroom. From here, the collection has taken a life of its own. And, indeed, is continuously added to as items come in. They are housed for a time, either directly owned or on behalf of other collectors. And then they are then sold to make way for the next.

Fairground traditions continue to flourish at Littleboy’s. With a grand collection of restored and preserved historic rides, living wagons, organs, art and artefacts – each with their own rich history and fascinating story – they all bring new life to the old. 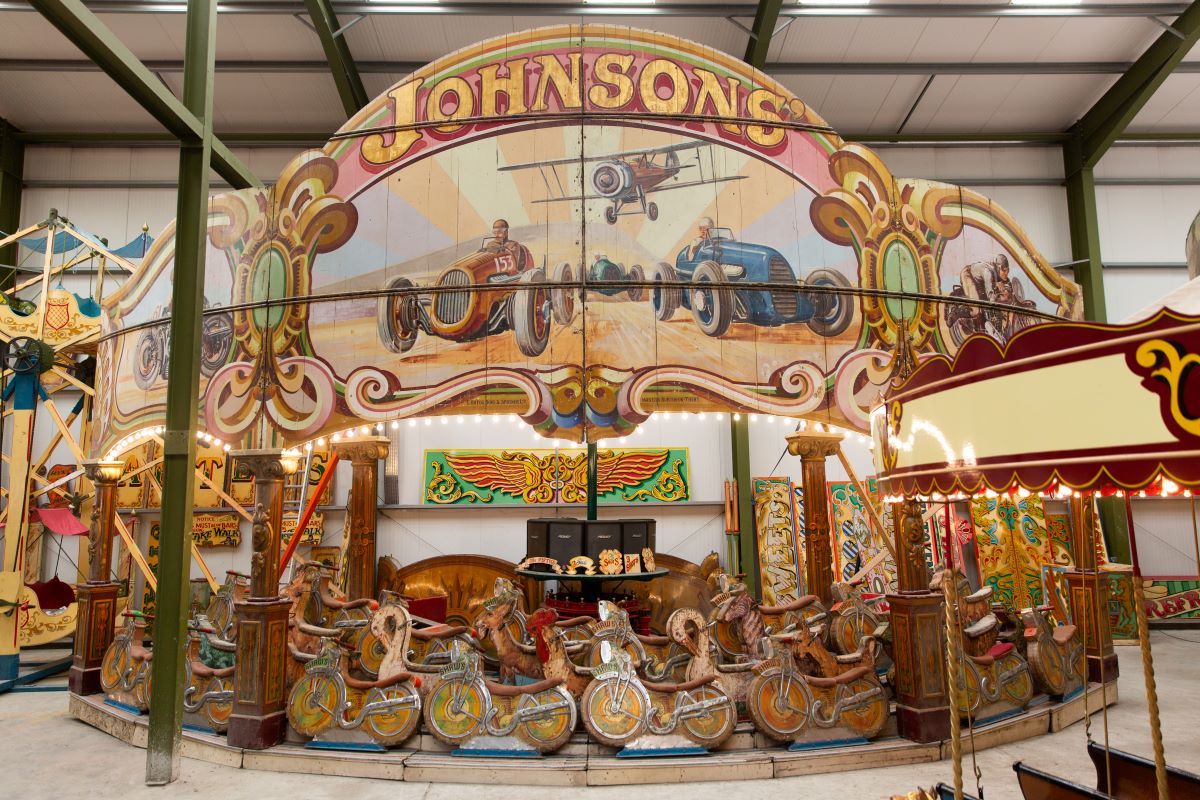 Indeed, some renowned collections have been built up over time, over generations, and by leading showland families, such as the Rundle Collection. The collection was started by John Harness Rundle in 1913 with a Wellington steam tractor and amassed by three generations of the same family over the past 105 years. It went on auction in 2018 with over 800 lots.

The director of proceedings for this auction best summed up why a fairground collection of this nature is so sought after: 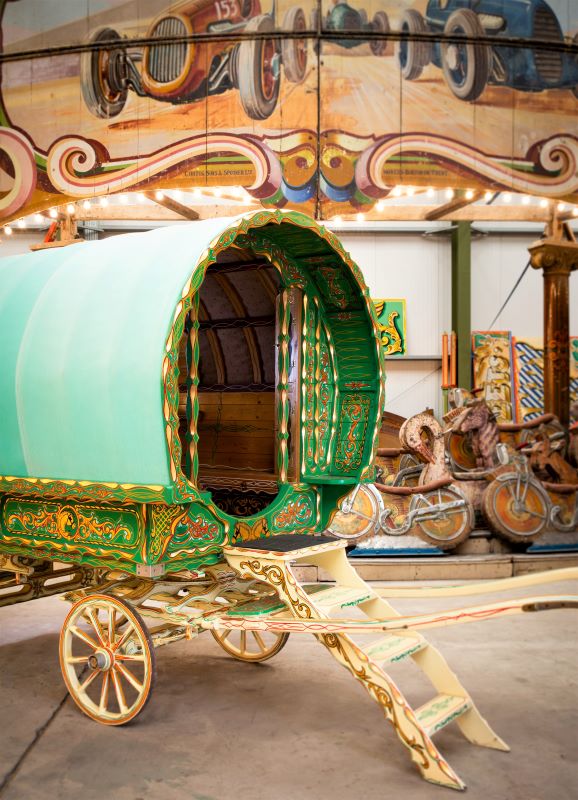 “The biggest draw for this sale will be the fairground items for which there are some serious collectors within the market. Since the 19th century, the funfair has been one of the staple events of the typical British childhood and the arrival of horse-drawn carts, steam engines, wagons and rides marked the beginning of the spring months.

Collectors enjoy these items which are packed with nostalgia and are becoming increasingly difficult to source via auction houses or antiques shops.

Many vintage fairground rides are now coveted as works of art with carousel horses making several thousands if they are good quality, whilst living vans have been known to top £50,000, particularly if they are by one of the main 19th century manufacturers such as Orton.”

From minor enthusiasts to serious collectors, it is not unexpected for a full-bodied collection to have an equally serious monetary value of well over £1 million and upwards. At Littleboys, famous fairground names of Shaws, Jones Bros, and WH Marshall’s Lakin Waltzer grace the showroom floor. 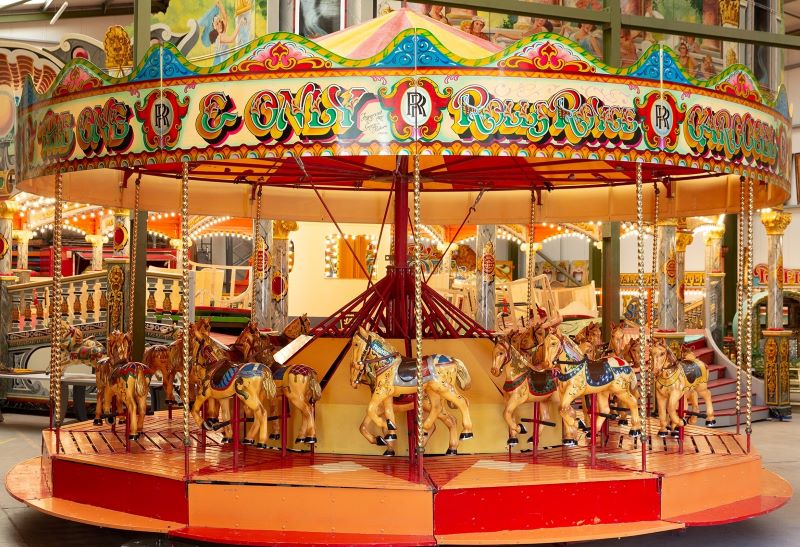 Collections come in all types

While one collector is preoccupied with collecting all the fairground living wagons they can find, another may specialise in fairground organs. Yet others may seek to own the entire collection of a known brand. There are familiar fairground brands, and then there are brands one would not normally associate with the funfair side of leisure – such as Rolls-Royce. 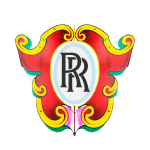 Serious fairground collectors, Littleboy’s Limited, currently have the final piece in a Rolls-Royce collector’s puzzle. For genuine and determined collectors of Rolls-Royce, a full collection is not complete without the one and only fairground carousel ride Rolls-Royce ever made. It holds its own unique story, and it was made for their workers’ field days to enjoy.

The Value of a complete vintage fairground Collection

“A golden curatorial thread of narrative”

It is not just Why people collect, but also – What constitutes a collection of great value? Each collector will have their own motivations, but one of the attractions is where a collection tells a story – a golden curatorial thread of narrative. 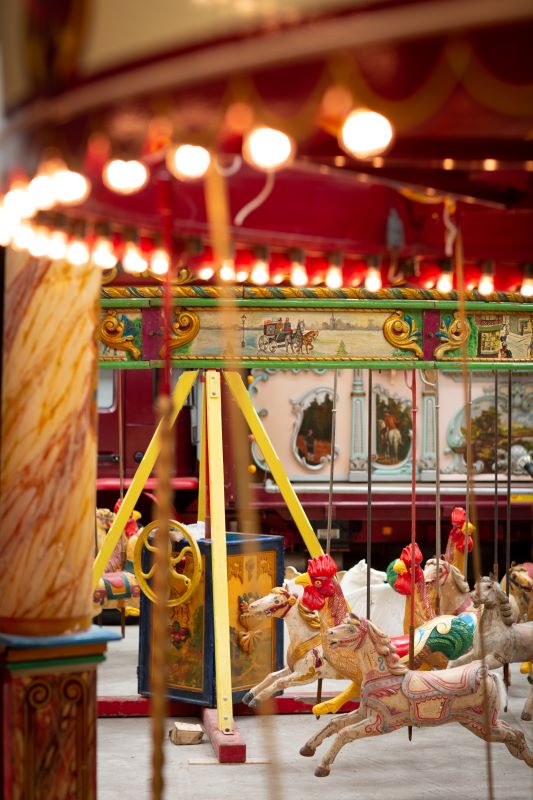 The narrative of romance

An example of what makes a collection hold their own stories: Some people specialise in collecting galloper horses and carousels. And interesting facts reside in these ‘folk sculptures’ in that the vast majority of American carousel figures were horses–simply because they were more popular with the riders.  However, a variety of menagerie figures were also produced, such as lions, tigers, giraffes, deer, rabbits, cats, goats, pigs, ostriches, and dogs.
Because American carousels rotate in a counter-clockwise direction, the right side of the animals faced outward and was the most ornately carved.  This is called the “romance” side of a carousel figure.

The same was true of most European carousels; but English carousels spin clockwise, so the romance side of English figures is the left.

There’s a difference between buying some fairground items and collecting. Buying is more of a random activity based on likes, preferences or attractions at any given moment. While collecting is more of a purposeful, directed long-term commitment.

“In both cases, you buy what you like, but if your goal is to collect and do it right you have to master two additional skills. The first is being able to effectively research, evaluate and decide whether or not to buy whatever items attract you. The second is being able to choose each individual work in such a way as to form a meaningful grouping: A collection,” according to an avid collector and expert.

“It’s about formulating a plan for making multiple acquisitions over time, in other words, building a collection”.

“What makes a great collector great is his or her ability to separate out specific works and assemble them in such a way as to increase or advance our understanding of that artform in particular or of the history and evolution of it in general.

In any mature collection, the whole becomes greater than the sum of the parts. The collector comes to be accepted as a respected authority and in exceptional cases, goes on to set the standards, determine tastes, trends and influence the future of collecting for all”.

Regardless of how you view your collecting, whether serious or recreational, there are techniques you can use to maximise not only the quality and value, but also your own personal enjoyment, appreciation and understanding. 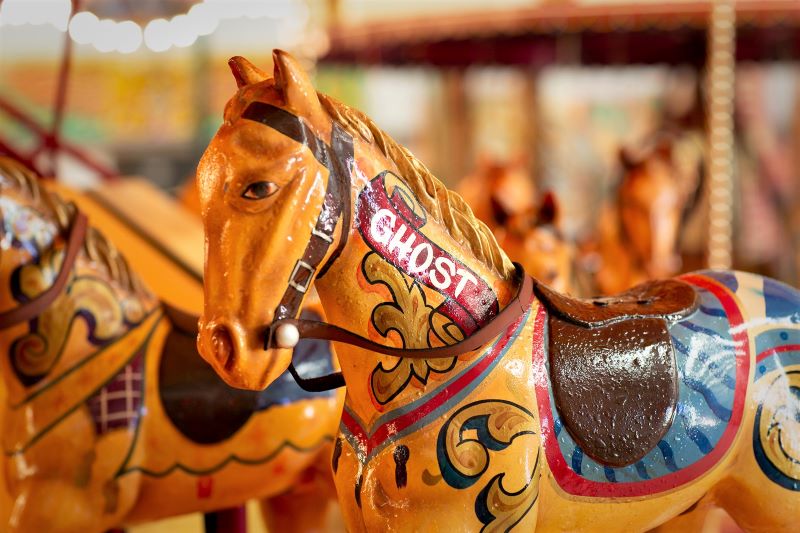 There came a point where vintage fairground rides and artefacts became highly sought after collectibles, with incredible value placed on them. Even its artwork moved from just being ‘folksy’ or ‘painted ponies’ to something much more. And with the Rolls-Royce Vintage Fairground Carousel, for example, a part of car and aero history is stamped on the artfully painted names of each galloper horse named after their own makes – Spirit, Phantom, Ghost, and more.

Value lies in factors such as rarity, ornateness, size, condition, beauty, a show family name, a renowned collector’s ensemble, a slice of history, and story.

From here, many collectors consider their private collections to be a sort of pension fund. It may not have started out with this intention. But after years of collecting, the investment value builds up significantly.

As any avid collector will confess to, it is an ardent and continuous journey of acquiring and selling vintage fairground items. But if one moves from a one-off buyer to a committed collector, then it also becomes about strengthening the foundation and intrinsic value of your fairground collection. And the golden age is able to live on through the restoration, preservation and collection of these magnificent works of art and machine.

Do you have vintage fairground items that you would like valued? Arrange an appointment with Littleboy’s Limited experts by emailing sales@littleboys.co.uk 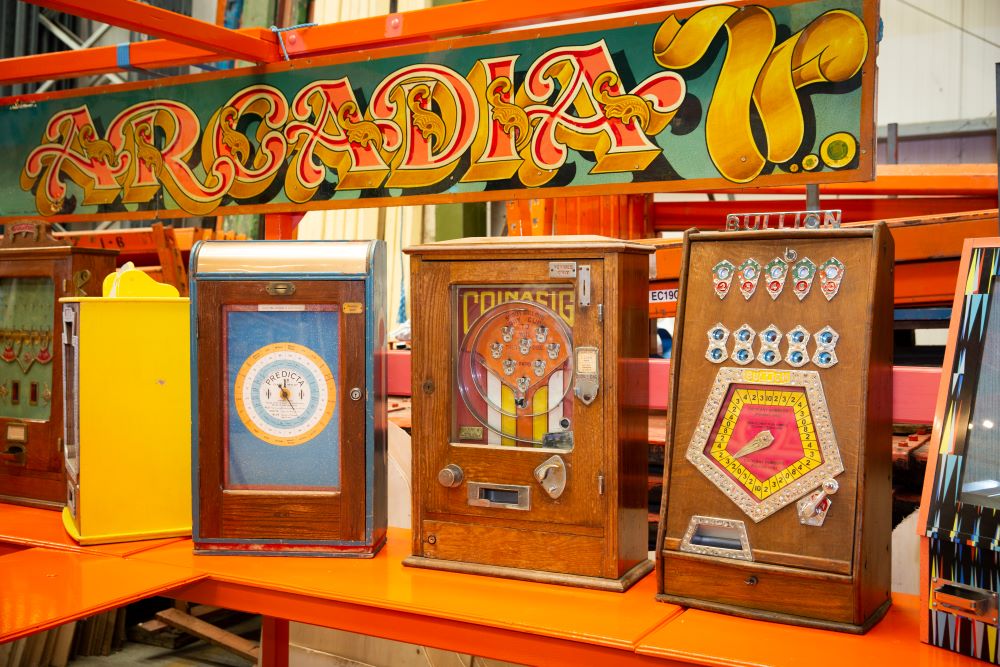 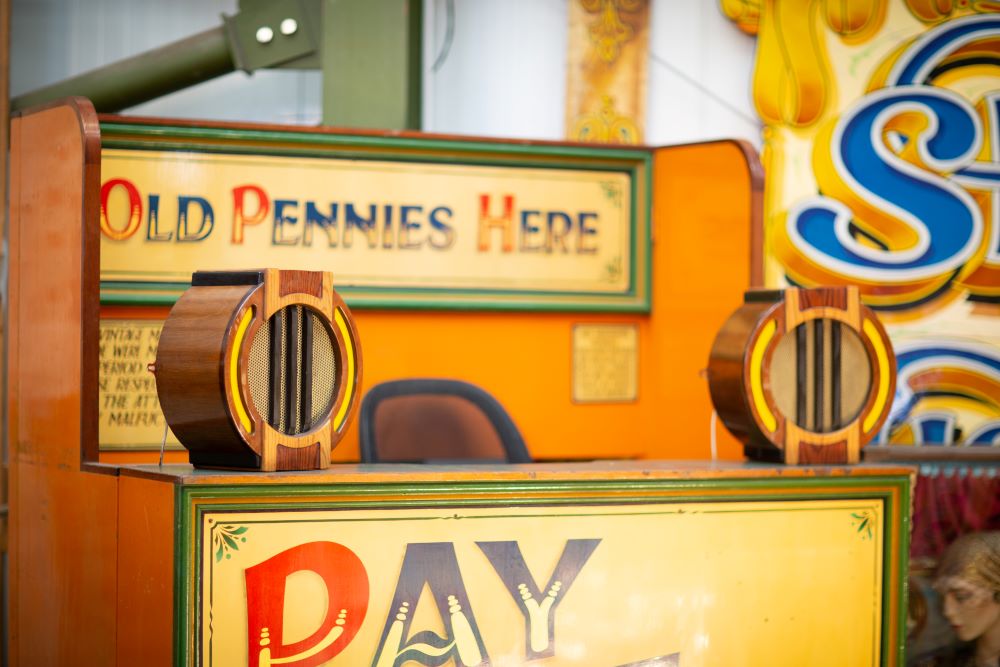 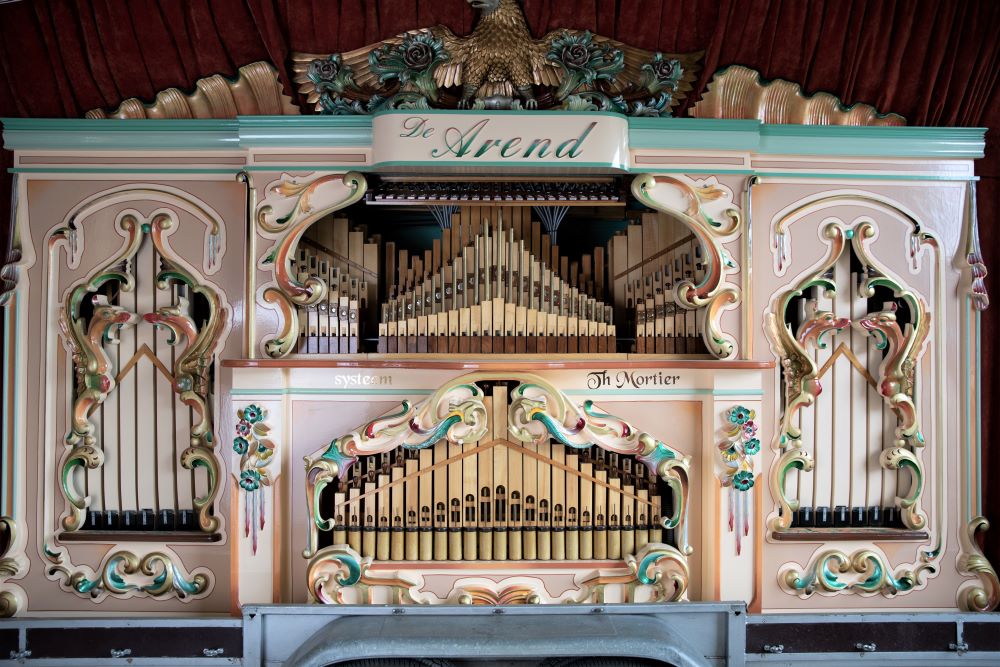 What happens when a deceased estate needs disposal or liquidation of vintage fairground collections?
April 30, 2021

How to sell your vintage fairground collection securely – and off-site
October 12, 2020
Archives
Categories
Go to Top